Xena: Warrior Princess was an action adventure series from the 1990's, which followed the adventures of former warlord Xena in an effort to redeem herself for her past atrocities.

Accompanied by her sidekicks Gabrielle and Joxer the Mighty, she battles foes such as the God of War Ares, the psychotic Callisto, the cunning Julius Caesar, and the mysterious witch Alti.

The show was well-known for mixing its mature themes and intense action with slapstick comedy, and thus the show used a lot of cartoon sound effects, particularly from the Hanna-Barbera library. It got to the point where the show's main fan-site is called "Whoosh", based off of the most omnipresent sound effect.

The show did seem to have an unspoken rule of mainly using the cartoon sound effects on only certain characters, like Xena, Gabrielle, (ESPECIALLY) Joxer, Callisto, Autolycus, and Varia. 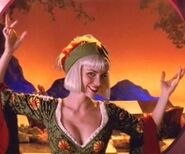 Hollywoodedge, Quick Whistle Zip By CRT057501
Add a photo to this gallery

Retrieved from "https://soundeffects.fandom.com/wiki/Xena:_Warrior_Princess?oldid=869104"
Community content is available under CC-BY-SA unless otherwise noted.