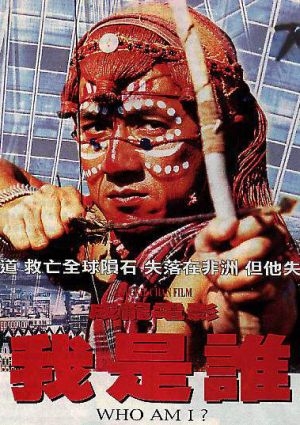 Who Am I? (traditional Chinese: 我是誰; simplified Chinese: 我是谁, also known as Jackie Chan's Who Am I?) is a 1998 Hong Kong action comedy film directed by Benny Chan and Jackie Chan, who also starred in the lead role. The film was released in Hong Kong on 17 January 1998. It is also Chan's second film to be scripted and shot in English, the first one being Mr. Nice Guy.

Jackie Chan, a top secret militant soldier, crashes into the South African jungle after his mission of kidnapping three scientists (who were experimenting with a powerful mineral) has gone awry. Waking up in a village of local natives, Chan has no memory of who he is, thus being addressed as "Who Am I?". His journey with aid from two female sidekicks to find out his identity leads him all the way to Rotterdam where he coincidentally discovers the location of the organization that kidnapped the three scientists. With no memory, "Who Am I?" is thirsty for answers by any means necessary.