Soundeffects Wiki
Register
Don't have an account?
Sign In
Advertisement
in: Anthropomorphic Animals, 2015 Made, 2015 Started,
and 61 more

Hacienda Post/Sabre Media Studios provided the post production sound services: Timothy J. Borquez and Alex Borquez are the Supervising Sound Editors, and Daisuke Sawa and Tony Orozco are the sound editors. Marc Mailand is the sound effects designer/editor for the pilot, one of his last Hacienda Post projects. The sound design style is generally realistic as is the nature of the show, although the Hacienda Post sound designers tend to use a fair number of "cartoon" sound effects in the show, usually in realistically appropriate contexts and rarely in a cartoonish context.

Three brother bears awkwardly attempt to find their place in civilized society, whether they're looking for food, trying to make human friends, or scheming to become famous on the internet. Grizzly, Panda and Ice Bear stack atop one another when they leave their cave and explore the hipster environs of the San Francisco Bay Area, and it's clear the siblings have a lot to learn about a technologically driven world. By their side on many adventures are best friend Chloe (the only human character in the cast), fame-obsessed koala Nom Nom, and Charlie, aka Bigfoot. 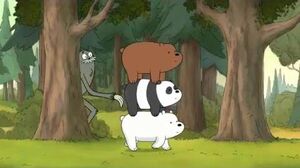