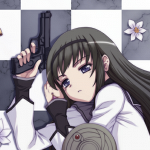 Hanna Barbera Large Explosion 03 (One day, when I'll make a tribute to cheesy 80's-early 90's action flicks, this is the sound I would use with the Series 6000 explosions)

Hollywood Edge 357 Magnum Pistol Shot (Sure, the first one could be used for hand cannons and all that, but the others could be for small calliber guns)

Hollywood Edge Pistol or Rifle Shot 02 (If I use a semi-automatic rifle in one movie, this would be the sound that will be used.)

Dynamic Range CD1 12 Guage Mossberg Firing (I don't mind the first sound with the soft "ouch!" Should have been made quieter.)

Series 6000 Female Scream 03 (So irritating to the point of inanity.)

Series 4000 Long Female Screams (I swear, if I hear those again, my brain's gonna get too much storm)

Hanna-Barbera Long Shell Screaming Down (Irritates me in cartoons, but not in every movie set during World War II)

THX Deep Note (Both loud and annoying. At this rate, why bother making the damn sound at all?)

Dynamic Range CD1 ricochets and exterior shots [except many interior shots sounds] (Yes, due to them finding their ways in a lot of movies.)

Series 2000 Brake Skid 02 (Could be, because many independent movies use it a lot. It's just a short skid with a mild squeal and I don't understand that they're used in multiple pitches, or editing out the mild squeal. It's even used today.)

Howie Long Scream (aka Gut-wrenching Scream with Fall) (Overused, but I don't hate it.)

Premiere Edition Vol.2 Car False Starts, Rhytmnic (I only know a few things that used it but no movies used that at all)

Retrieved from "https://soundeffects.fandom.com/wiki/User:Aginnon1?oldid=678864"
Community content is available under CC-BY-SA unless otherwise noted.