watch 01:45
The Loop (Movies)
Do you like this video?
Play Sound

This long-running animated comedy focuses on the eponymous family in the town of Springfield in an unnamed U.S. state. The head of the Simpson family, Homer, is not a typical family man. A nuclear-plant employee, he does his best to lead his family but often finds that they are leading him. The family includes loving, blue-haired matriarch Marge, troublemaking son Bart, overachieving daughter Lisa and baby Maggie. Other Springfield residents include the family's religious neighbor, Ned Flanders, family physician Dr. Hibbert, Moe the bartender, Children's entertainer Krusty the Clown who is a drug addict and his current sidekick Sideshow Mel, and Mr. Teeny the monkey, plus former sidekick Sideshow Bob who wants revenge on Bart and the world, Illegal immigrant Apu who runs the Quick E Mart, beer addict Barney Gumble, there is also Mr. Burns and Smithers who run the power plant and police chief Clancy Wiggum. 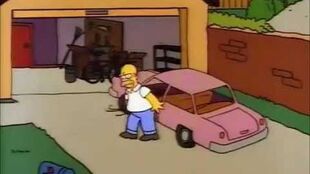 Retrieved from "https://soundeffects.fandom.com/wiki/The_Simpsons?oldid=964110"
Community content is available under CC-BY-SA unless otherwise noted.