Penny Proud is about to celebrate her 16th birthday, and she is excited for herself and her friends to be part of a dance group led by 15 Cent since he's Sticky's cousin. However, when 15 Cent drives Penny home, her father Oscar gets angry when he finds them kissing. Overreacting on this, Oscar grounds Penny indefinitely and cancels her birthday, which leaves Penny very furious as she outrageously resents Oscar for being her father.

In the meantime, Oscar manages to create a serum that can make his Proud Snacks tastier, but it instead causes the snack to expand and explode. As he is hauled away following his failed presentation, he protests that his formula has no expiration date, which is overheard by a man named Dr. Carver, who has been trying to create an army of humanoid peanuts but never got his formula stabilized. Plotting to nab the formula, Carver invites the Proud family to his home in Legume Island. Trudy forces Oscar and Penny to go, hoping they will bond in spite of their issues. Upon arrival, the Prouds meet the G-nomes, dwarf-sized creatures made from peanuts.

Carver tries to negotiate obtaining the formula from Oscar, but when Oscar refuses, Carver reveals he has created peanut clones of his family from DNA snatched from them while they were partying. Oscar runs away and tries explaining to his family, but they don't believe him. Meanwhile, the clones get a mix-up when the real Penny comes with them back to the mainland to search for the formula, while her clone remains with the original family. Penny soon enjoys the free life, which was encouraged by the clones, but eventually gets tired of it.

At that moment, a mysterious G-nome leads the Prouds and the Penny clone on a perilous journey to the other side of the island, saying there is someone who can answer their questions. Along the way, the Penny clone proves to be the kind of daughter that Oscar desires: obedient. When they meet the person that the G-nome wanted them to meet, he turns out to be the real Dr. Carver, who explains that the Dr. Carver that they met was actually a clone made of a peanut. Dr. Carver revealed that he created the G-nomes based on his research of peanuts. He created the Carver clone as a means of carrying out his research for the better of mankind, but the Carver clone went sizzling crisp in the sun one day and became evil. Donning a disguise of his original form, the Carver clone took over the island and enslaved the G-nomes, turning Carver's peanut research for evil. This makes Oscar realize that his formula is the key and tells the family he had left it in a locket for Penny's birthday, which she opens back home.

With this information, the Penny clone reveals herself by trapping the Prouds and the real Dr. Carver before informing the other clones, who take the formula after revealing their true nature to the real Penny. Realizing what just happened, Penny gathers her friends to head over to Legume Island and rescue her family. Unfortunately, the Carver clone has already used the formula to create and stabilize his peanut soldier army to conquer the world and has left on an air blimp. Anticipating that this would happen, Carver reveals that he has a container of gas that could instantly turn solid peanuts into peanut butter. Penny takes the container and boards on the blimp, intending to release it. Before she is about to, the Carver clone tries to convince her otherwise by offering her a life of complete freedom from her family. Though Penny admits that while she may have a lot of issues with her family (especially Oscar), she refuses the Carver clone's offer and unleashes the gas, melting the peanut soldier army and reverting the Carver clone back into a lifeless peanut.

With the Carver clone's plot finally foiled, the Prouds are declared heroes by the public, and Oscar gives Penny her birthday necklace before allowing her to attend the dance group with 15 Cent and her friends. 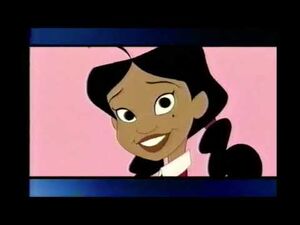