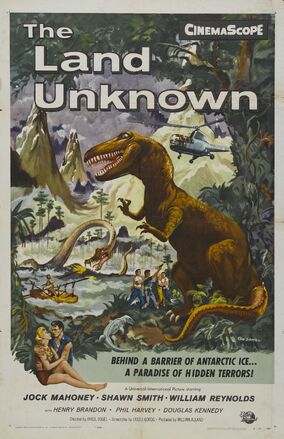 The Land Unknown is a 1957 science fiction CinemaScope adventure film about a naval expedition trapped in an Antarctic jungle. The story was allegedly inspired by the discovery of unusually warm water in Antarctica in 1947. It starred Jock Mahoney and Shirley Patterson and was directed by Virgil W. Vogel. The film is notable for its low-budget special effects, which include men in dinosaur suits, puppets and monitor lizards standing in for dinosaurs. William Reynolds recalled the studio spent so much money on their mechanical dinosaur that they could not afford to shoot the film in color as they first planned.

On a naval expedition to Antarctica, three men and reporter Maggie Hathaway crash-land in a crater 1000 m below sea level. There, they encounter steamy tropical forest, dinosaurs, carnivorous plants, and human footprints, as Maggie's clothes become more and more abbreviated.