The Eggs is an Australian-Canadian flash-animated TV series created by Brendan Byrne and Tony Byrne. It started aired in 2004, and ended in 2005.

The Eggs follows the colourful adventures of the four anthropomorphic egg college graduates (Benedict, Yolky, Scramble, and Sunnyside) as they continue their mission through the Loonyverse to search out valuable new sounds for their music-loving home planet of Kazoo. On their travels, they visit many unique and strange different planets each with their own music and sounds. 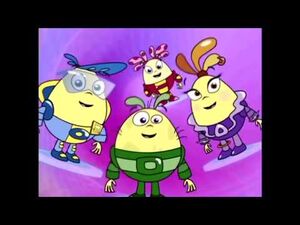