watch 01:45
The Loop (Movies)
Do you like this video?
Play Sound

The Adventures of Blinky Bill tells of Blinky Bill and his friend's efforts to rebuild the village in Greenpatch following its destruction by humans. The main characters, Blinky Bill, Nutsy, Splodge, Flap and Marcia are reunited after the destruction of their village, have chosen a site for their new home and are cautiously settling in. But the story is about more than rebuilding their demolished homes. It is also about how these animals re-establish themselves as a community and how they come to terms with their new neighbours, the Dingoes. Adapted from Dorothy Wall's best-selling children's books. 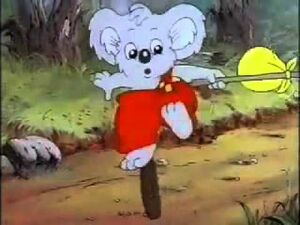 Retrieved from "https://soundeffects.fandom.com/wiki/The_Adventures_of_Blinky_Bill?oldid=961697"
Community content is available under CC-BY-SA unless otherwise noted.