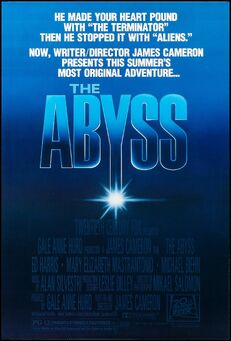 The Abyss is a 1989 American science fiction film written and directed by James Cameron and starring Ed Harris, Mary Elizabeth Mastrantonio, and Michael Biehn. When an American submarine sinks in the Caribbean, a US search and recovery team works with an oil platform crew, racing against Soviet vessels to recover the boat. Deep in the ocean, they encounter something unexpected.

The film was released on August 9, 1989, receiving generally positive reviews and grossed $89.8 million. It won the Academy Award for Best Visual Effects and was nominated for three more Academy Awards.

Formerly married petroleum engineers who still have some issues to work out. They are drafted to assist a gung-ho Navy SEAL with a top-secret recovery operation: a nuclear sub has been ambushed and sunk, under mysterious circumstances, in some of the deepest waters on Earth.