watch 01:56
The Loop (Movies)
Do you like this video?
Play Sound

Tetris Attack is a puzzle game developed by Intelligent Systems and published by Nintendo for the Super Nintendo in August 1996. A Game Boy version was released at the same time. In the game, the player must arrange matching colored blocks in vertical or horizontal rows to clear them. The blocks steadily rise towards the top of the playfield, with new blocks being added at the bottom. Several gamemodes are present, including a time attack and multiplayer mode. 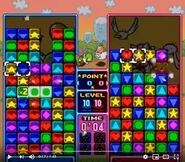 SMW Yoshi Sound
Add a photo to this gallery

Retrieved from "https://soundeffects.fandom.com/wiki/Tetris_Attack?oldid=700064"
Community content is available under CC-BY-SA unless otherwise noted.