SpongeBob SquarePants is a Nickelodeon Production created by Stephen Hillenburg.

From "Reef Blower" (Episode 2) onward, Jeff Hutchins serves as the series' sound effects designer & editor (Although credited on standrad prints of "Help Wanted", Jeff was not involved with that pilot, nor was he originally credited on the standalone pilot). Tom Syslo is the supervising sound fx editor and may've been the uncredited sound designer of the pilot "Help Wanted", according to Roy Braverman; Syslo contributed some editing on few later episodes.

The sound services began with Horta Editorial & Sound (uncredited), working with Timothy J. Borquez's team there and at Pacifica Sound Group and Hacienda Post (the latter, including housing facility Sabre Media Studios, continued working on the show from Seasons 5-8, but only for track reading). During Season 5, Jeff Hutchins and the sound services moved on to Oracle Post; in 2012 they relocated to Atlas Oceanic Sound and Picture, which also recorded dialogue for The SpongeBob Movie: Sponge Out of Water (2015). In 2019, Jeff and the Atlas Oceanic/Oracle Post sound team relocated to Rob McIntyre's Sound Rebels.

A yellow sea sponge named SpongeBob SquarePants, who enjoys being a cook at Krusty Krab, lives in the Pacific Ocean. He embarks on various adventures with his friends at Bikini Bottom. 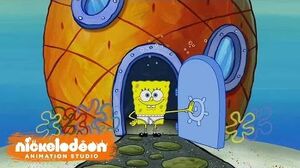