Eleven-year-old Hunter Steel searches for the legendary inner world by following the instructions in his grandfather's journal. He enters a cave where he finds a mysterious manacle that attaches itself to him. A spider startles Hunter, who falls into a hole to the center of the Earth and into the subterranean world of Arachna. There, he discovers a small group of elite warriors struggling to survive and to save Arachna from the attack of giant insect mutants. The warriors are children, each fighting with the help of their own 10 ft (3.0 m) battle spiders. They call themselves "Spider Riders". In the English TV series, the ages of the characters were reduced.

There is a prophecy that says a surface-dweller or Earthen, like Hunter, will bring disaster to the Inner World. Sparkle mentions it in the beginning of the TV series. When Princess Sparkle finds out she says, "I wonder if he will bring doom to us...or to them." 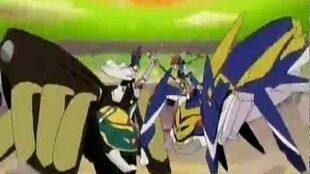