The show follows the exploits of four boys, Stan Marsh, Kyle Broflovski, Eric Cartman and Kenny McCormick. The boys live in the fictional small town of South Park, located within the real-life South Park basin in the Rocky Mountains of central Colorado. The town is also home to an assortment of frequent characters such as students, families, elementary school staff, and other various residents, who tend to regard South Park as a bland, quiet place to live. Prominent settings on the show include the local elementary school, a bus stop, various neighborhoods and the surrounding snowy landscape, actual Colorado landmarks, and the shops and businesses along the town's main street, all of which are based on the appearance of similar locations in Fairplay.

Stan is portrayed as the everyman of the group, as the show's website describes him as an "average, American 4th grader". Kyle is the lone Jew among the group, and his portrayal in this role is often dealt satirically. Stan is modeled after Parker, while Kyle is modeled after Stone. They are best friends, and their friendship, symbolically intended to reflect Parker and Stone's friendship, is a common topic throughout the series. Eric Cartman (usually nicknamed by his surname only) is loud, obnoxious, and amoral, often portrayed as an antagonist. His anti-Semitic attitude has resulted in a progressive rivalry with Kyle, although the deeper reason is the strong clash between Kyle's strong morality and Cartman's complete lack of such. Kenny, who comes from a poor family, wears his parka hood so tightly that it covers most of his face and muffles his speech. During the show's first five seasons, Kenny would die in nearly every episode before returning in the next with little-to-no definitive explanation given. He was written out of the show's sixth season in 2002, re-appearing in the season finale. Since then, Kenny's death has been seldom used by the show's creators. During the show's first 58 episodes, the boys were in the third grade. In the season four episode "4th Grade" (2000), they entered the fourth grade, but have remained ever since. 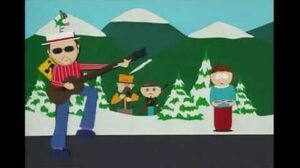