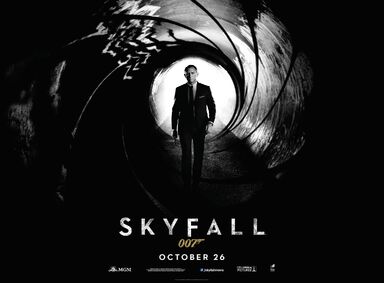 Skyfall is a 2012 spy film and the twenty-third in the James Bond series produced by Eon Productions. The film is the third to star Daniel Craig as fictional MI6 agent James Bond and features Javier Bardem as Raoul Silva, the villain, and Judi Dench as M. It was directed by Sam Mendes and written by Neal Purvis, Robert Wade, and John Logan and features the theme song "Skyfall", written and performed by Adele. It was theatrically distributed by Sony Pictures Releasing. The story centres on Bond investigating an attack on MI6 that leads to a wider plot by former agent Raoul Silva to discredit and kill M as revenge for abandoning him. It sees the return of two recurring characters after an absence of two films: Q, played by Ben Whishaw, and Miss Moneypenny, played by Naomie Harris.

Mendes was approached to direct after the release of Quantum of Solace in 2008. Development was suspended when MGM ran into financial trouble, and did not resume until MGM emerged from bankruptcy in December 2010; meanwhile the original screenwriter, Peter Morgan, left the project. When production resumed, Logan, Purvis, and Wade continued writing what became the final version. Filming began in November 2011, primarily in the United Kingdom, with smaller portions shot in China and Turkey.

When James Bond's (Daniel Craig) latest assignment goes gravely wrong and Agents around the world are exposed, MI6 is attacked, forcing (M Dame Judi Dench) to relocate the agency. These events cause her authority and position to be challenged by Gareth Mallory (Ralph Fiennes), the new Chairman of the Intelligence and Security Committee. With MI6 now compromised from both inside and out, M is left with one ally she can trust: Bond. 007 takes to the shadows, aided only by field agent, Miss Eve Moneypenny (Naomie Harris), following a trail to the mysterious Tiago Rodriguez, a.k.a. Raoul Silva (Javier Bardem), whose lethal and hidden motives have yet to reveal themselves.