Soundeffects Wiki
Register
Don't have an account?
Sign In
Advertisement
in: TV SHOWS, 2007 Made, 2007 Started,
and 141 more

SML (formerly "SuperMarioLogan") is an independent production company which launched as a channel on YouTube on December 8, 2007, which contains the collection of the amateur-made comedy series of puppetry/live-action videos, featuring the crossover cast of characters from different franchises (e.g. Nintendo, DreamWorks Animation, Walt Disney Productions, etc.) all created, written and produced by the user Logan Thirtyacre.

The SML series became an instant hit with users upon its debut, despite with some controversies throughout the years.

These movies share a variety of plush and puppetry following the bizzare life and misadventures of Mario and Bowser Junior. Most of the videos by SuperMarioLogan contains the series of adult themes, toilet humor, dark humor, popular culture references, and simplistic dialogue. This is recommended for ages 13 and up, though videos can occasionally have a much higher age limit. Each season is renewed every new year on January 1st.

In this segment, we look at the strangest adventures of a normal guy, whose life is anything but. The series is about Mario (the famous Nintendo plumber in red, later renamed Marvin) having adventures with his crazy friends/roommates; Black Yoshi, Shrek, Woody and Toad. In other stories, Mario and his girlfriend Rosalina who loves the stars and they take care of Jeffy, a highly stupid retarded boy who likes stupid habits like saying "Why you do that?", putting pencils up his nose and spanking his wrongly-put diaper.

In this segment, we look at the most unconventional and dysfunctional family ever. The segments are about Bowser (later renamed Braxton) and his son, Bowser Junior. While Bowser enjoys watching TV and bossing around his chef, Chef Pee Pee, Junior likes hanging out with his friends; Joseph, a Koopa Troopa who lives by himself (due to his parents being dead) and Cody, a nerdy and gay Magikoopa who likes Ken dolls. There is also the Brooklyn Guy, who is part of both segments, who hence his name, is a Brooklyn-accented guy with all the jobs in the world like a firefighter, a doctor and a cop, and some crazy ones too, like a Pokémon professor, a fake Mickey Mouse at Disney World, and an employee at Toys R Us and Chuck-E Cheese. 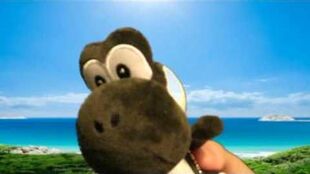