Pooh's Grand Adventure: The Search for Christopher Robin (also known as Winnie the Pooh's Most Grand Adventure in some countries) is a 1997 animated direct-to-video film produced by Walt Disney Home Video and released on VHS on August 5, 1997.

Once upon the last day of a golden summer, Christopher Robin attempts to tell his friend Winnie-the-Pooh some sad news, but Pooh is uninterested and continuously changes the subject until Christopher Robin forgets about it. After spending the day playing, Christopher Robin leaves Pooh with the quote, "You're braver than you believe, and stronger than you seem, and smarter than you think," but the drowsy Pooh does not understand the sentiment. Autumn arrives the next morning, and Pooh awakes to find a pot of honey at his doorstep, failing to notice a note attached to it. After eating the contents and staining the note in honey, Pooh searches for Christopher Robin to ask about the honey pot, but discovers that he is missing. Pooh's friends – Piglet, Tigger, Rabbit, and Eeyore – have not seen Christopher Robin either and cannot decipher the note attached to the pot, so they go to Owl for advice. Although he is able to remove some of the honey from the note, Owl misinterprets it as a request for help from Christopher Robin. Further mispronouncing the word "school" as "skull", he deduces that Christopher Robin has been taken to a distant and dangerous place called "Skull", a cave where the monstrous "Skullasaurus" resides. Owl equips the group with a map and sends them into the "Great Unknown" of the Hundred Acre Wood.

Throughout their journey through the Great Unknown, the group hears strange noises behind them, which they assume is the Skullasaurus. The group slowly begins to realize just how helpless they are without Christopher Robin in the outside world. Piglet, Tigger, and Rabbit come to believe they do not have the courage, strength, or intelligence respectively to go on; Piglet is abducted by a swarm of playful butterflies in a tranquil field, leaving him feeling terrified and useless, Tigger falls into a deep gorge and is unable to bounce out to safety, eventually causing the others to dive in with him, and Rabbit continuously makes bad leadership decisions following Owl's inaccurate map. Pooh tries to comfort them each with the advice Christopher Robin had given him, but fails due to his inability to remember exactly what he said. When Rabbit finally breaks down and admits he has no idea where they are going, the group comes to terms with their failure and sulk in a nearby cave. While everyone is asleep, Pooh privately laments on the pain he experiences from losing Christopher Robin.

The next morning, the five friends realize they had spent the night in the Skull Cave. The group enters and splits up to find Christopher Robin; when Rabbit, Tigger, Piglet, and Eeyore eventually reunite, they are scared away by Pooh's distorted reflection as he walks towards them from behind a crystal wall, mistaking him for the Skullasaurus. As Pooh winds up stuck in a small crevasse, his friends believe that he has been eaten. They discover the "Eye of the Skull" where Christopher Robin is supposedly trapped, and overcome their fears and doubts to reach it. Observing his friends' teamwork, Pooh excitedly frees himself from the tight gap, only to slip down a long descent and fall into a deep pit that he is unable to escape. While there, he realizes that Christopher Robin is still with him in his heart, even when they are not together, just as Christopher Robin had promised. As Piglet, Rabbit, Tigger, and Eeyore enter the Eye, they are found by Christopher Robin, who has been searching for them as well. He clears up Owl's misunderstanding of the note, explaining that he wanted Pooh to "help [him]self" to the honey pot he gave him and that he was really at school (which is what Christopher Robin tried to tell Pooh earlier). The roars of the Skullasaurus they have been plagued by were actually the noises of Pooh's stomach growling, indicating that the monster wasn't real.

After Christopher Robin rescues Pooh from the pit, the group exits the cave, only to discover that from the outside, it and the other places they have crossed are not nearly as big and scary as they seemed when Christopher Robin was not with them (their frightening appearances were all just illusions). That evening after the group returns home, Christopher Robin says he will be returning to school the next day, but Pooh declares that he will always be waiting for him, and the two happily watch the sunset, knowing they will always have each other in the sanctuary of the Hundred Acre Wood. 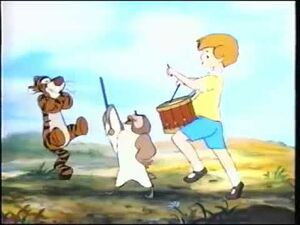 (Hollywoodedge, Quick Whistle Zip By CRT057501 in reverse, heard when Eeyore drops into the ravine after saying "I said 'ouch'".)