Soundeffects Wiki
Register
Don't have an account?
Sign In
Advertisement
in: Arcade Video Games, 1980 Made, 1980 Started,
and 23 more

Pac-Man (パックマン Pakkuman), originally known as Puckman in Japan, was an arcade game created by Toru Iwatani and released by Namco in 1980, and it was published by Bally Midway for U.S. distribution. The game would go on to become a cultural icon worldwide.

In 1982, Atari released a now infamous port of the game to their Atari 2600 system. The game was a massive success, selling over seven million copies, making it the best-selling cartridge on the 2600 - in retrospect, however, the game has been heavily criticized for its differences from the arcade original, suffering from poor controls, graphics, and sounds.

The port of the game was eventually recorded by Sound Ideas and became a commonly used stock sound effect.

A Yellow round sphere named Pac-Man has to fight off a quarlet of colorful Ghosts consisting of Blinky (red), Pinky (pink), Inky (cyan) and Clyde (orange), while eating all of the Dots and Power Pellets scattered around a maze. 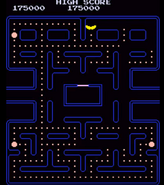