Oobi is a puppet show made in 2000 for Nickelodeon and its sister channel Noggin. It started as a series of two-minute shorts and premiered as a long-form series in 2003. The show revolves around four hand puppets with eyes and accessories who use very simple, distilled dialog.

The show's concept is based on a training method used by puppeteers learning to operate Muppets, which involves using their hands and a pair of ping pong balls instead of a puppet. The show won many awards from organizations like Parents' Choice and the Television Academy. A spin-off, Oobi: Dasdasi, premiered in 2012 and ran for 78 episodes.

The show takes place in a neighborhood where bare hand puppets talk and act like people. The main character is a boy named Oobi. He lives in a quaint, old-fashioned house with his sister Uma and his grandpa Grampu. His friend Kako lives across the street and often visits. Together, Oobi and his family have funny, simple adventures that celebrate the awkward steps of growing up. The characters have a very simple manner of speaking, meant to mimic how kids talk in very early childhood.

Secondary characters include Frieda the Foot, one of Oobi's best friends who happens to be a foot puppet instead of a hand; Inka, Oobi's piano teacher who eventually becomes Grampu's girlfriend; and Angus, a nerdy and insecure classmate of Oobi's whose eyes are below his fingers rather than on top. 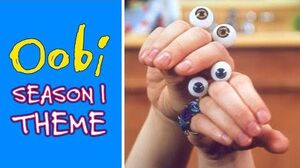 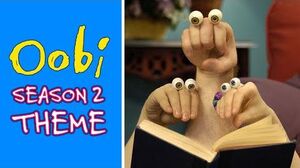 Oobi - Season 2 Theme Song
Add a photo to this gallery

Retrieved from "https://soundeffects.fandom.com/wiki/Oobi?oldid=764661"
Community content is available under CC-BY-SA unless otherwise noted.