It had its first showing on August 9, 2009 on Discovery Kids Latin America and on May 9, 2010 on TV Brazil. It also premiered in Canada on Treehouse TV on August 20, 2010. It was financed with the laws of federal tax incentives, the Procult (BNDES) and the Audiovisual Sector Fund – FSA.

The show centers around the friendships of three children, Yuri, Lili and Matt, each of whom has a "Big Big Friend" who is invisible to adults and other children but seen by all three friends.

This TV show is flash-animated with Toon Boom Harmony.

How can three preschool friends climb a mountain, star in a circus, fly an airplane or hide inside their own paintings? Why it's easy! With a little imagination, that is. Your imagination can take you anywhere you want to go, let you be anyone you want to be, and, if you're lucky, it'll even create your very own BiG BiG Friend! And that's just what happened to three young friends, Yuri, Lili and Matt. One day, not so long ago, Yuri was nervous about going to preschool for the first time. Was he going to make new friends? Was his teacher going to like him? What if he didn't know what to say? Just as he was imagining all these things, a big blue elephant named Golias popped out of nowhere and joined Yuri on the way. Yuri was always very shy, but somehow things were different with Golias. The silly elephant's big and bold personality complimented Yuri's quiet, thoughtful ways; the two seemed a perfect match. And with that, Yuri had found himself a BiG BiG Friend! At school, Yuri was surprised to learn that he wasn't the only one with a BiG BiG Friend... A little girl named Lili and a little boy named Matt both had BiG BiG Friends, too! Lili had Nessa, a tall pink giraffe, and Matt had Bongo, a bouncy green kangaroo. Naturally, the six friends gravitated towards each other and became playmates of imaginative proportions. Whether they're battling against a spinach jungle, searching through giant laundry forts for lost swim trunks, or journeying to a castle in the sky, big problems always seem to shrink down to size with the help of their BiG BiG friends. 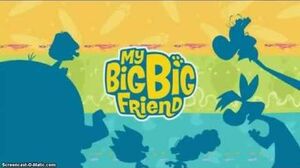