Mickey Mouse Funhouse is an American computer-animated children's television series created by Phil Weinstein and Thomas Hart. The series debuted with a special on July 16, 2021, and was followed by the official premiere on Disney Junior on August 20, 2021.

Disney Junior created the series to continue its pattern of original pre-school animated series set within the Mickey Mouse universe. Many key members of the creative team of Mickey Mouse Mixed-Up Adventures developed the series.

Mickey Mouse returns with his friends Minnie Mouse, Donald Duck, Daisy Duck, Goofy and Pluto. The friends meet Funny, an enchanted, talking, and energetic playhouse. Funny magically transports the group of friends to a range of destinations which allows them to embark on adventures unique to that land. He can also change his shape and appearance to match the new surroundings, and can even project his face on any surface to communicate with Mickey and friends. 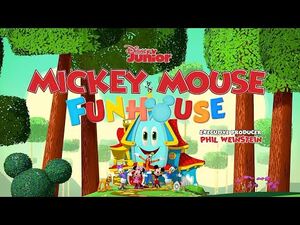