Korgoth of Barbaria is a pilot episode for what was originally planned as an American adult animated television series created by Aaron Springer, a storyboard artist, writer and director for Dexter's Laboratory, The Grim Adventures of Billy & Mandy, Samurai Jack, and SpongeBob SquarePants, who previously created another failed pilot at Cartoon Network Studios called Periwinkle Around the World; he would later go on to produce Billy Dilley's Super-Duper Subterranean Summer for Disney XD. Genndy Tartakovsky, creator of Dexter's Laboratory and Samurai Jack, directed the animation for the pilot; this was not the only time he worked on a pilot created by Springer, as Tartakovsky also produced and directed Periwinkle Around the World.

In a dark future wasteland, the great cities have risen and fallen, primordial beasts have reclaimed the wilderness and thieves and savages populate sparse, dirty towns. From the frozen north emerges a warrior known as Korgoth, and his merciless savagery may be his only key to survival. 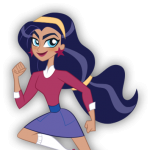