watch 01:29
Wiki Targeted (Entertainment)
Do you like this video?
Play Sound

A typical episode is a series of competitive games of dare, in which each joker receives either a thumbs up or thumbs down for his performance. At the climax, the joker who tallied the most thumbs down is the loser and is thereby subjected to a "punishment". The games are contrived scenarios in which one joker is challenged to embarrass himself by engaging with unwitting members of the general public, receiving commands from the other jokers who are orchestrating and surveying the bizarre scenario from behind the scenes with covert recording equipment. The most common premise is "you refuse - you lose." The intro describes the show as, "scenes of graphic stupidity among four lifelong friends who compete to embarrass each other." The games are loosely structured, relying heavily upon improvisation. The show's comedic themes range from witty dialogue to slapstick routines, with the reactions of both the jokers and the members of the public serving as punchlines.

Impractical Jokers' eighth season premiered on March 28, 2019. The series has been renewed for a 26-episode ninth season, expected to premiere in 2020. A feature-length film began production in April 2018 and was theatrically released on February 21, 2020. 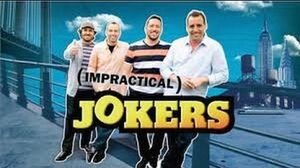 Impractical Jokers Intro
Add a photo to this gallery

Retrieved from "https://soundeffects.fandom.com/wiki/Impractical_Jokers?oldid=923063"
Community content is available under CC-BY-SA unless otherwise noted.