Ed, Edd n Eddy is a Canadian-American TV series that aired on Cartoon Network from 1999 to 2010.

The show revolves around three preteen boys who all share similar names. They do not get any allowance from their parents so they can't buy Jawbreakers, their favorite candy. Because of that, they spend most of their time coming up with scams to get money from their neighbors, which in turn makes them the most unpopular kids in town. 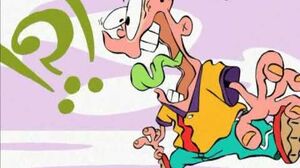