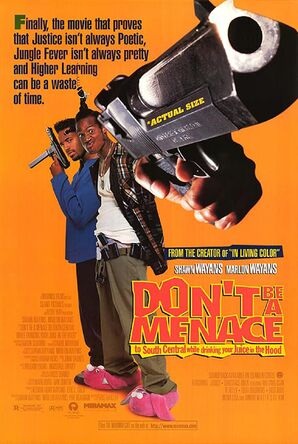 Don't Be a Menace to South Central While Drinking Your Juice in the Hood (or simply Don't be a Menace) is a 1996 American crime-comedy film directed by Paris Barclay in his feature film directorial debut, and produced by Keenen Ivory Wayans. It stars the Wayans brothers Shawn and Marlon Wayans, who were also both writers with Phil Beauman. The film was released in the United States on January 12, 1996.

Similar to I'm Gonna Git You Sucka, the film spoofs a number of African-American, coming-of-age, hood films such as Juice, Jungle Fever, South Central, Higher Learning, Do the Right Thing, Poetic Justice, New Jack City, Dead Presidents, Friday, Above the Rim, and most prominently Boyz n the Hood and Menace II Society. The film's title borrows phrases from some of those films, and some of the actors who starred in those movies appear in the film, in some cases appearing in similar roles or scenes as the films being parodied.

Don't Be a Menace to South Central While Drinking your Juice in the Hood is a parody of several U.S. films about being in the 'Hood', for instance Boyz n the Hood, South Central, Menace II Society, Higher Learning and Juice. We follow Ashtray as he returns to the place he grew up in and meet his father and his basket-case friends. Crazy stuff happens. For example, Ashtray is older than his father and his best friend Loc Dog's grandmother is a trigger-happy old lady who blames her eccentric-looking kid for not being tough enough.