Dino Ranch is an American-Canadian CGI animated children's television series created by Matthew Fernandes. Dino Ranch follows the adventures of the Cassidy family as they tackle life on the ranch in a fantastical, “prewestoric” setting where dinosaurs roam. The series debuted on CBC in Canada on 16 January 2021, and on Disney Junior in the United States on 18 January 2021, and later on Disney+ on June 18, 2021

This series is set in a world where humans and dinosaurs live alongside each other. While Dino Ranch is first and foremost a working, self-sustained ranch run by the Cassidy family, it also serves as a dinosaur sanctuary. 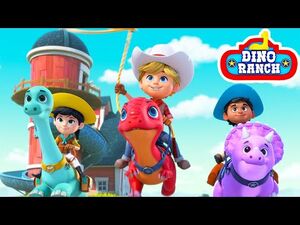