The plot of the series begins when the Butt-Ugly Martians (B.U.M.) are forced to invade planets for the evil Emperor Bog, but when they are sent to Earth they become addicted to American culture. Deciding not to hurt Earth, they simply pretend to be occupying the planet for Bog. They are shown around by their Earthling friends: Mike, Cedric, and Angela. The Butt-Ugly Martians continue to hang out on Earth as long as Emperor Bog never finds out. 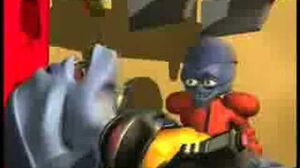 Butt Ugly Martians
Add a photo to this gallery

Retrieved from "https://soundeffects.fandom.com/wiki/Butt-Ugly_Martians?oldid=776459"
Community content is available under CC-BY-SA unless otherwise noted.