Baby Shark's Big Show! is a preschool television series created by the South Korean company Pinkfong. It is part of the wider Baby Shark brand. Kim Min-seok, the CEO of Pinkfong, executive-produces the series. SmartStudy, the parent company of Pinkfong, owns the trademark to the show.

In South Korea, it premiered on the Educational Broadcasting System (EBS) on December 25, 2020. In the United States, the series premiered on March 26, 2021 on Nickelodeon's Nick Jr. block.

On February 26, 2021, 5 episode shorts premiered one month before the television premiere.

PINKFONG's popular brand, Baby Shark, is back with a fun-filled preschool series. It follows Baby Shark and his best friend, William the fish, as they journey on comedic adventures in their community of Carnivore Cove. 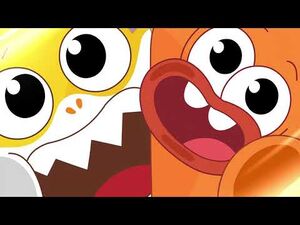