Around the World in 80 Days is an animated television series that lasted one season of sixteen episodes, broadcast during the 1972–1973 season by NBC. It was the first Australian-produced cartoon to be shown on American network television. Leif Gram directed all sixteen episodes, and the stories were loosely adapted by Chester "Chet" Stover from the novel by Jules Verne.

More comedic in tone than Verne's novel, the motives of Phileas Fogg (Alistair Duncan) differed somewhat from those of his literary forerunner.

Fogg was passionately in love with Belinda Maze (Janet Waldo), whose uncle, Lord Maze (Owen Weingott), sternly disapproved of the commoner Fogg marrying his niece. Fogg proposed a wager: if he could travel around the world in eighty days, then Lord Maze would give him Belinda's hand in marriage; if Fogg failed, he would abandon her. The two men also made a side bet of ₤20,000.

Fogg was accompanied by his manservant, Jean Passepartout (Ross Higgins), and Passepartout's pet monkey, Toto. They employed all the methods of transportation available in the late 19th Century–balloons, trains, elephants, and steam ships–in the course of their journey. Fogg and Passepartout dispensed geographical knowledge to the audience at each of their stops.

Lord Maze hires a saboteur, Mr. Fix (Max Osbiston), to interfere with Fogg and Passepartout's journey. Unlike his counterpart in Verne's novel, Fix was not a Scotland Yard detective attempting to arrest Fogg on suspicion of bank robbery.

Fogg managed to complete his journey by the end of the programme's single-season run, winning Belinda's hand with little time to spare. 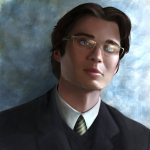